Sherlock Holmes in Cape May 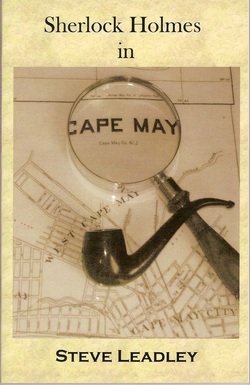 Sherlock Holmes is in Washington on a discreet mission for the British government when a telegram arrives from Emlen Physick, a wealthy doctor and leading citizen of Cape May.  A mysterious murder has been committed in the seaside town and Dr. Physick hopes Holmes and Watson will journey to Cape May to investigate the matter.  Holmes agrees and "the game is afoot!"

Accompany the most famous literary character of the Victorian Age as he tests his investigative talents amidst the charm of the nation's oldest resort.

The critical and commercial success of this novella led to a contract with Blackcoat Press to write two more Holmes stories.

This book is available in paperback or as an e-book in the Amazon.com Kindle Store via links below:
Link to Paperback Edition @ Amazon.com
AMAZON E-BOOK
B&N Nook E-BOOK

Pirate Treasure of Cape May 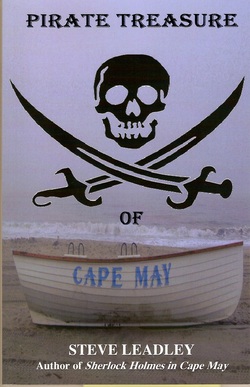 Legend has  it that Captain Kidd buried treasure along the Jersey shore.  Could some of the infamous pirate's loot have been hidden in Cape May?

Eleven year old Max is unhappy  about being dragged along to spend a rainy spring weekend in Cape May with his mom and little sister.  Things go from bad to worse when the kids are left in the care of an elderly neighbor, and worse still when the power is knocked out as the storm increases into a full blown nor'easter.  Their host offers to tell a story to the bored siblings-- a story he swears to be true.  As the wind howls at the windows and the thunder cracks overhead, they gather around the fireplace as he takes them back to the late 1940s when a boy about Max's age and his little sister use courage, intelligence and guile to follow clues through hidden rooms, secret passages and coded messages in search of treasure though to be buried by the infamous Captain Kidd.
118 pp.

Review from Bibliotravel.com:  "10-14 year old boys and girls who enjoy a good mystery will have a lot of fun with this story.  The adventures undertaken in and around Cape May will also appeal to adults who like an engaging tale in a nostalgic setting."

This book is available in paperback or as an e-book in the Amazon.com Kindle Store via links below:

A Victorian Romance in Cape May 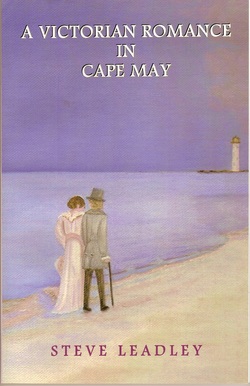 Like many wealthy Philadelphians of the Victorian Era, seventeen year old Kate MacIntyre, her younger sister Julia and their Aunt Clementine have decided to holiday in Cape May.  Kate and Julia are excited about the prospect of a delightful summer in the seaside resort, but their aunt has a special purpose:  to find Kate a husband from amongst the upper class vacationers.  When the handsome aristocrat Frederick Van Riem shows interest in Kate, Aunt Clementine is ecstatic.  However, Kate also meets an enterprising young man from the working class.  As she struggles to sort out her feelings about the two men, Kate discovers that all is not what it seems.  Kate’s romantic adventure comes to a dramatic conclusion amidst the great fire that threatened to consume Cape May in 1878.


This book is available as an e-book in the Amazon.com Kindle Store as well as in paperback through Amazon.

Sherlock Holmes and The Circle of Blood 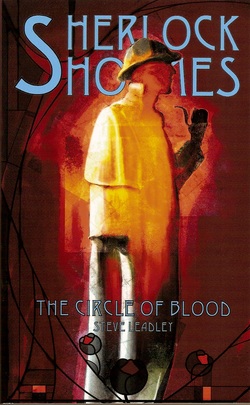 This Holmes Trilogy contains Sherlock Holmes in Cape May (under the title The Circle of Blood) and two other Holmes stories; The Highland Intrigue and The Medium Problem.

The Circle of Blood:  One of Cape May's citizens has been the victim of a brutal and mysterious murder.  A bizarre and mysterious message lies adjacent to the body:  a bust of Socrates encircled in blood.  The police are baffled since nothing seems to be missing and the murdered man was a Quaker pacifist, seemingly liked by all.  A wealthy patriarch of the city reaches out to Holmes and Watson to solve the disturbing murder.

The Highland Intrigue: Watson receives a letter from an old comrade asking for assistance.  His uncle, the Duke of Montrose, has died in an "indelicate" manner.  Holmes and Watson journey to Fintry Castle in Scotland to Investigate but the problem turns out to be much deeper than first expected and not only involves murder but a historical mystery seeped in Scottish folklore.

The Medium Problem:  Watson learns that a medium and a confederate are conducting seances in London.  She is gaining a following, capitalizing on the Spiritualist movement that has taken root.  Watson sees the seances as fraud and implores Holmes to expose the pair but the detective remains dis-interested until the medium recovers a missing diamond through her alleged supernatural powers...

Review from Amazon:  "All three stories are impeccably written. Not only are the plots imaginative and mufti-faceted, but the author gives each tale a realistic setting with historical accuracy."

This book is available at Amazon.com and other online retailers.

The Veil of Maples and Pines 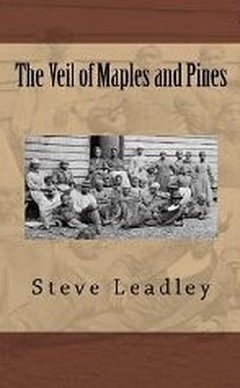 When a young prodigy in 1850s Virginia begins to question the morality of slavery, will he have the fortitude to take action?

Gideon Covington is embroiled in the bloody siege at Vicksburg during the Civil War and is not confident that he will survive the battle. He has therefore decided to reveal the extraordinary events that brought him here.

Gideon’s tale begins when he is twelve years old. The boy is considered to be a genius and although he longs for a university education, he seems destined to remain in rural Virginia as he is heir to the ancestral plantation. Family tragedy accelerates his fate and his hope to further his education begins to evaporate. Fortunately he finds a mentor in a visiting professor. The lessons of the eccentric teacher are academic in nature, but so thought provoking that Gideon begins to do the unimaginable for a Southerner: question the morality of slavery. However, these lessons are interrupted when the owner of a neighboring plantation dies under suspicious circumstances. Under the professor’s tutelage, Gideon investigates the death using the stories of Edgar Allan Poe as a model. The culmination of the mystery leads the boy to confront not only the murderer, but the institution of slavery itself.
Link to paperback edition@ Amazon.com
Amazon E-BOOK

THE SARATOGA DECEPTION
A Mystery Novel of the American Revolution
A Fox and Shelby Mystery Vol. 1 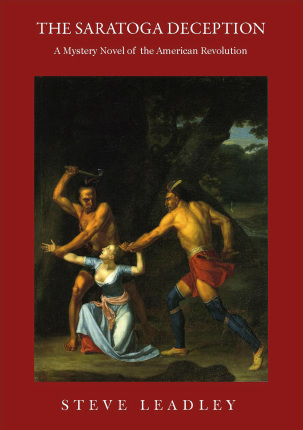 Could the mysterious death of a young woman hold the key to the outcome of the American Revolution?

In the summer of 1777 British general John Burgoyne aspires to execute an elaborate plan to grab control of New York State thereby driving a wedge between New England and the rest of the colonies.  If successful, the stratagem could doom the idealistic rebellion.  However, north of Albany the general’s Indian scouts return to camp with the scalp of a young woman, Jane McCrea.  They claim that they only took the scalp after the colonial militia accidentally killed her but the Americans contend that the Indians have committed murder-- proving that the British have no control over their Indian allies who are bent on savaging women and children.  If the American claim is true, the girl’s murder could be a powerful tool in recruiting men to the cause and stopping General Burgoyne.  For this reason General Washington sends the eccentric and enigmatic Mr. Fox to the region to determine the truth.  Fox is an urbane Quaker allegedly committed to pacifism, but is also a skilled woodsman and Indian fighter.  The bizarre contradiction of Mr. Fox both intrigues and exasperates Captain Shelby, the young officer sent to aid in the investigation.  Before long attempts are made on the lives of the investigators and it becomes apparent that there is more to the girl’s death then anyone had supposed.  Fox and Shelby follow clues and fight off would be assassins as they piece together the true facts of the girl’s demise-- a truth that could indeed turn the tide of the war in favor of the Americans.

Praise for The Saratoga Deception: “The Saratoga Deception is a magnificent work. Leadley takes an intriguing subject in American history and seamlessly blends in a wonderfully thrilling mystery. This ability to artfully interweave fact and fiction not only keeps the reader captivated, but educates as well.”
--Professor Sean McHugh, Monmouth University
LINK TO Amazon kindle E-BOOK
Link to Paperback edition @ Amazon.com
LINK TO B&N NOOK E-BOOK
November 1777- A double agent working under the Governor of Connecticut is murdered, but not before muttering a cryptic phrase: “French mission… Charts… Passage below structure…” Who killed the spy? Was his position compromised? Had he stumbled upon a secret too vital to allow him to live? What is the meaning behind the man’s dying words? These vexing questions prompt the governor to appeal to his friend General Washington for aid. The Commander-in-Chief assigns the task to the men who had solved the puzzling murder of Jane McCrae before the Battle of Saratoga. Again Captain Shelby and Mr. Fox follow clues and cheat death to unravel a truth that could impact the outcome of the American Revolution.
LINK TO AMAZON KINDLE E-BOOK
LINK TO PAPERBACK EDITION @ AMAZON
LINK TO B&N NOOK E-BOOK

MURDER AT VALLEY FORGE
A Fox and Shelby Mystery of the American Revolution Vol. 3 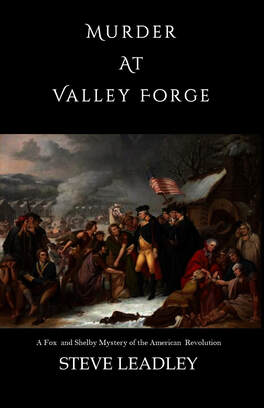 December 1777- When a militiaman is found murdered outside of the Valley Forge encampment a clue could link the killing to a plot against General Washington. Just twenty miles away in occupied Philadelphia, a soldier from Captain Andre’s company is murdered, as is his personal valet. Impressed with his previous investigative successes the commander of the Pennsylvania militia enlists Captain Shelby to solve the murder of the militiaman and determine if there is indeed a conspiracy against Washington. Meanwhile, Shelby’s old investigative colleague the Quaker-warrior Ezra Fox is plying his skills in Philadelphia trying to uncover the killer at work in the city. Are the murders related? Is there really a scheme against General Washington? Once again the dutiful Captain Shelby and enigmatic Mr. Fox must risk life and limb to expose the truth. Murder At Valley Forge is the 3rd volume in the Fox and Shelby American Revolution mystery series. 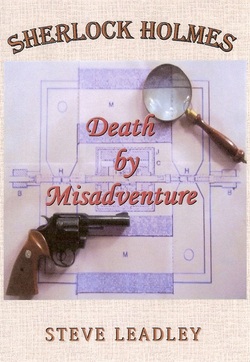 Inspector Lestrade considers a young man’s death merely accidental but his rival Tobias Gregson is not completely convinced and solicits the opinion of Sherlock Holmes.  Holmes concludes that Lestrade is mistaken but even the great detective is unaware of just how deep the waters run in the affair.  As he and Watson tug at the thread they uncover a plot of murder and deception intended to bring down an empire.

SHADOW  AGENDA
A Mystery Novel of World War I 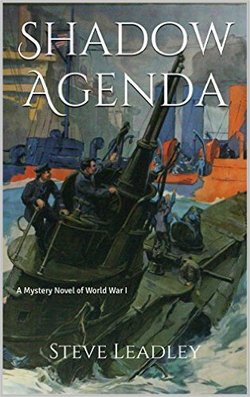 Could the mysterious murder of a British diplomat decide America's role in World War I?

Winter 1917- The Great War has been raging in Europe for two and a half years. The United States has struggled to maintain its neutrality; it’s idealistic President longing to mediate an end to the horrific conflict.  However when a British embassy worker is murdered in Washington D.C., the American position becomes even more tenuous.   With uncanny political instinct Assistant Secretary of the Navy Franklin Roosevelt realizes that the crime could hold a secret with international implications.  He therefore calls in covert agent Frank Wells, a man who is tenacious to the point of obsession.  As Agent Wells investigates, he uncovers a tangled web of espionage and intrigue that could shake American diplomacy to its foundations-- if he lives to present his findings.

​If you are interested in nautical historical fiction, I recommend The Fighting Sail series by Alaric Bond.  Check out the series here: